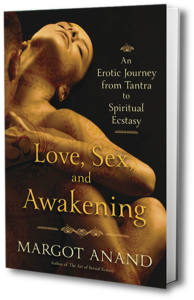 The advent of her recent new book Find God in Bed! Margot Anand recounts her fascinating adventures and provides techniques and exercises to help you connect to the spiritual potential of sex and cultivate a deeper, more fulfilling love life.

Join Ilona Selke as she inquires with Margot about how we can improve our love life! 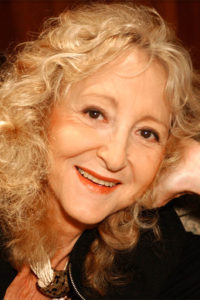 Her educational documentary, Margot Anand’s Secret Keys to the Ultimate Love Life, is an in-depth course in her renowned methods (offered on three DVDs) and delivers a Tantra refresher and some fun, novel twists to those familiar with her classic and timeless techniques. Her latest teachings are designed to inspire a whole new generation of lovers.

Throughout the past two decades, Margot Anand has developed and taught the Love and Ecstasy Training®, a method of healing and enhancing sexuality to its ultimate potential: ecstasy. She is also the founder of nine worldwide SkyDancing® Tantra Institutes—a new approach to Tantra, or “Neo-Tantra.” SkyDancing Tantra is probably the most complete path to sexual bliss for western lovers.

Margot Anand’s ability to bring the teachings of Tantra beyond the bedroom and into everyday life is her signature. She is also pioneering a new method, “Yoga of Living,” in which she coaches people in designing ecstatic lifestyles. In addition, she has a new book (soon to be published) called Love, Sex and Awakening: Finding God in Bed, which will enlighten her audience with twelve life adventures that were her initiations into the connection between sexuality and spirituality.

Another of Margot Anand’s visionary creations is SpiritWorks, whose mission is to create bridges across cultures and to take people on spiritual pilgrimages during which they can directly contribute to the well being of the local, indigenous people.
Margot Anand has appeared on many national (CNN, CNBC, ABC) and international television and radio programs and has been featured as a keynote speaker at many prestigious national and international conferences including the Association of Humanistic Psychology; Association of Transpersonal Psychology, Body & Soul Conferences presented by Omega Institute; the Outside the Box conference presented by the Young Presidents’ Organization; and the National Institute for the Clinical Application of Behavioral Medicine.

Margot Anand’s speaking engagements are many and varied. She addressed the topic “Sex, Power and Politics” at the 1998 State of the World Forum conference—a meeting of formidable world leaders. A year later, at the 1999 State of the World Forum conference, she convened and chaired a panel of experts consisting of Dr. Jean Houston, Dr. Dean Ornish, Dr. Deepak Chopra and Marianne Williamson on the topic “Meditation, Power and Politics.” She is an adjunct faculty member at Dr. Deepak Chopra’s seminars and conferences and has taught at Dr. Dean Ornish’s annual retreats for heart patients. Margot has also taught with Tony Robbins at his “Ultimate Passion” workshop for couples. Mr. Robbins called her “…the leading expert in the world in the field of Tantra.” She also appeared with Dr. Jeffrey Mishlove on the PBS program “Thinking Allowed.”

Margot Anand has been interviewed and quoted in prestigious publications such as The Wall Street Journal, Time, Conscious Life, The Washington Post, New Age Journal, Cosmopolitan magazine, and many others.

A native of France, Margot received her degree from Sorbonne University in Paris. She has extensive training in Gestalt therapy, Hindu and Buddhist Tantra (having studied with several spiritual masters including the great mystic Osho in India), bioenergetics, massage, meditation, Arica and Integral yoga.